As the region’s medical education leader and top health care provider, the Brody School of Medicine at East Carolina University and Vidant Health are working together to improve the health and well-being of the residents of Eastern North Carolina. This website is intended to inform community leaders, county health departments, health care providers, and the public on health issues that impact Eastern North Carolina, focusing on the COVID-19 pandemic.

A “weather forecast” model to predict the rate of COVID-19 cases in each county. You can find this and other dashboards in Supplemental Dashboards.

Percent of ED visits for Influenza-Like Illness (ILI) and COVID-19-Like-Illness (CLI) to emergency departments in Northern (NENC) and Southern (SENC) Eastern North Carolina. You can find this and other dashboards in Supplemental Dashboards.

Hot spot analysis to identify COVID-19 clusters (hot and cold spots) at a county level in North Carolina. You can find this and other types of analysis in Research.

Eastern North Carolina (ENC) is represented by the 41 counties east of Interstate 95 (see map). In general, the 29 county sub-region (ENC-29) comprising the coastal plains is significantly poorer and less healthy than the rest of North Carolina. The mortality (death) rates and prevalence of certain chronic diseases, including selected cancers, cardiovascular diseases, asthma, and diabetes are far higher in ENC than elsewhere in the state. Health for all racial/ethnic groups, and for all income and education groups, is poorer in ENC than in the rest of NC. 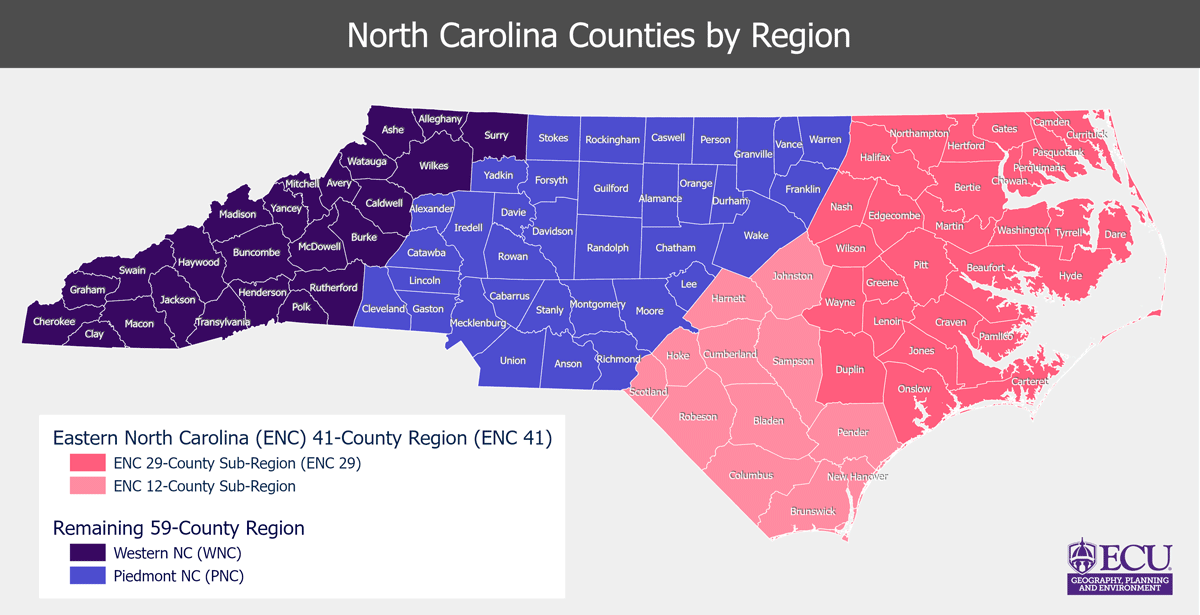 Identifying health concerns and reducing health disparities* among vulnerable populations and disadvantaged communities across ENC are key objectives of this project. Through applied research, education, and training, East Carolina University (ECU) and its partners are working to reduce disparities in infectious illnesses like COVID-19 and other diseases among rural, ethnic-minority, and socioeconomically disadvantaged populations.